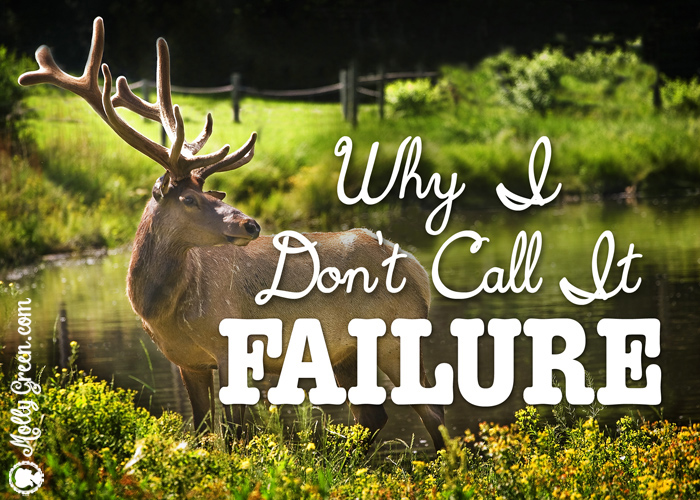 When I came home last Sunday, from a rare weekend away, I found a herd of elk trampling my garden. The huge and heavy-hoofed animals had already tramped through the potatoes, nibbled the lettuces, and eaten every last one of the beets. What had taken me months to grow, the elk took out in minutes. I might have cried, except, as a homesteader, I’m used to this.

My husband and I have been homesteading off grid and living in a yurt for two years. Everything on our property is ours, made by us, fashioned by us, or brought here by us. We have a tremendous amount of ownership, but it doesn’t come without a cost. Almost everywhere we’ve turned these last two years we have met failure. In our first year we failed at keeping bees, setting up a bee colony too soon and in a place where they didn’t have enough forage. We failed at keeping ducks, introducing them also too soon, before we had adequate protection from predators. We failed at keeping the ambitious pace we had set for ourselves, hoping to have a house built in just one year. More than two years have passed now, and our house is still a stack of beams under a tarp.

Do We Ever Question the “HARD LIFE”?

Is it worth it? We’ve asked ourselves this question more times than I can count. Is it worth it, to constantly experience our own limitations? To have our capabilities so stretched? To never have a weekend off or even a good sleep-in on a holiday morning? To feel like we’re battling the elements for our very survival? We ask ourselves constantly if this is worth it, but we always answer, “Yes.” My husband and I are motivated by different sides of the same thing. I want to be a homesteader because I want to live with less of a footprint, be more of a collaborator with the natural world, and avoid total dependency on industrial food systems that I believe are diseased beyond repair. My husband? Mostly he just wants his freedom.

We bought three bare acres in the foothills of the Rocky Mountains to try our hand at making a life of our own, on our own terms. Since then we have discovered exactly what we are capable of. I’ve found that I can wield an ax and scare away a black bear. My husband has proven that he can build shelter for his family, move water from an underground spring to a hot shower, and manage 2,000 pound logs from full grown timber.

Finding Our Limitations is a Lesson in Humility

But we have also found our limitations. We don’t know things until we know them. In many cases, the only way for us to learn how to do things right is to do them once wrong. This is a lesson in humility, but it is also free education in the university of the real world. There is a wide field of practical knowledge that is lost, or nearly lost, to the general population. How to butcher an animal, how to stretch a fence, how to keep the elk out of your garden. I didn’t start being a homesteader because I already knew how to do all of these things. If that were the requirement, most everybody would be out of luck. I started homesteading because I believed I could learn how to do these things.

I have failed in a lot of ways, but I have succeeded in learning from my failures. I don’t know for sure, but the carrots we harvested yesterday might have tasted a little sweeter, for having felt the loss of the beets. And the security of watching glass canning jars fill up with food is more tangible, for having had empty jars last year. Our learning curve is steep, but because of that, all the more exciting. I get a thrill every time I bake bread in our wood-fired oven—two years ago I could barely build a fire in the firebox. And I love watching plants grow tall in the rich soil I’m slowly building where there was once only clay.

Most of all, I love the feeling that I’m growing my own spine, where there used to be so many layers of dependency. Most of all I love the feeling that the sense of self I’m developing now as a homesteader is real. For now at least, I’ll take this hard scrabble life. I’ll take my struggles to draw rich food out of clay ground. I’ll take the slow and careful plan to reintroduce bees and ducks, understanding that it was largely haste to which I lost them both the first time. I’ll take this clear look at my capabilities and my limitations, which is in equal parts humiliating and triumphant. We’d rather live a hard life with freedom and integrity than a sheltered life of dependency. I’ll take my war with the elk.

Esther Emery lives with her husband and three children in a 314 square foot yurt in the Boise foothills. Homesteader, homeschooler, and homemaker, Esther blogs about her off-grid life and Christian faith at www.estheremery.com, and shares DIY tips and strategies on the YouTube channel “Fouch Family Off Grid.”

To get started go here! We are making available hundreds of articles, how-to guides, printables and other useful resources available for viewing and download.
More Homesteading 101: What Is Homesteading and How to Get Started Articles:
Scroll back to top