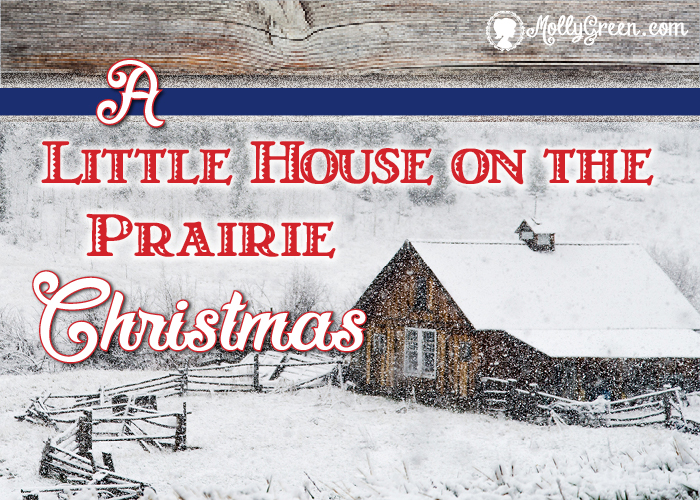 Most Americans know about Laura Ingalls Wilder, the famous author of a children’s historical fiction series. Many important lessons can be found in their pages if you take a closer look. Here, I share some important Christmas lessons for youth, which are beautifully illustrated, and children are sure to appreciate.

Laura was born to Charles and Caroline Ingalls in 1867 in a little log cabin in Wisconsin. Two years later, Pa, Ma, Laura, and sisters Mary and baby Carrie, moved to isolated territory near Independence, Kansas. The family’s homestead became the setting for the book Little House on the Prairie, which details the overwhelming challenges in carving out a life as farmers and pioneers. It also recounts the fun times. Laura considered her childhood a good one, “full of sunshine and shadow.”

Christmas marked an annual time of great anticipation and celebration. But one year on the prairie, the nearby creek had risen so high that Pa was unable to cross it, ride to town, and buy presents for the girls. Laura recalled her disappointment that Christmas Eve in chapter 19:

They watched Ma dress the wild turkey, and it was a very fat turkey. They were lucky little girls, to have a good house to live in, and a warm fire to sit by, and such a turkey for their Christmas dinner. Ma said so, and it was true. Ma said it was too bad that Santa Claus couldn’t come this year, but…he would surely come next year.

And so both Laura and Mary went to bed expecting nothing but empty stockings on the 25th. Like almost all children in the 1870s, the two young sisters believed that Santa gave them yearly presents. However, they had also been taught to be thankful for what they had—a lesson they often had to practice in dealing with the hardships of pioneer life.

A Surprising Turn On Christmas Day

The story takes a surprising turn when Laura fast-forwards to Christmas day. In the dim light of dawn, the door-latch rattled, Jack the bulldog growled, and the Ingalls’ closest neighbor, Mr. Edwards, hurried into the tiny cabin nearly frozen and soaked to the bone. He had crossed the turbulent creek, with water up to his neck, carrying his clothes and a special bundle on his head. Mr. Edwards had brought Christmas gifts from Santa, he said. Soon afterward:

Something was shining bright in the top of Laura’s stocking. She squealed and jumped out of bed. So did Mary, but Laura beat her to the fireplace. And the shining thing was a glittering new tin cup.


Mary had one exactly like it … Then they plunged their hands into the stockings again. And they pulled out two long, long, sticks of candy. It was peppermint candy, striped red and white. They looked and looked at the beautiful candy …

It’s interesting that both girls thought of their new tin cups as extravagant treasures. They also felt such great joy in receiving candy that they found it hard to eat their sweet treats. Then:

Those stockings weren’t empty yet. Mary and Laura pulled out two small packages. They unwrapped them, and each found a little heart-shaped cake. Over their delicate brown tops was sprinkled white sugar…

Ma had managed to salvage just enough white flour and sugar to create two lovely homemade cakes. Neither Caroline nor Charles had anticipated Mr. Edwards’ arrival, though, and so the bounty had increased:

Laura and Mary never would have looked in their stockings again. The cups and the cakes and the candy were almost too much. … Then they put their hands down inside …and in the very toe of each stocking was a shining bright, new penny!

Christmas Lessons For Youth (And All Of Us)

Imagine a twenty-first century child—or adult—receiving a tin cup, a bite-sized cake, a piece of candy, and a penny as their only Christmas gifts. Would any of us appreciate such meager presents, even as stocking stuffers, or as gag gifts?

I’m not saying we should return to 1870s’ standards, but reading about the Ingalls’ celebration does give perspective on how much our expectations have skyrocketed. Maybe it’s time to return to a more sensible approach to Christmas giving. Maybe we could all use less emphasis on expensive gifts and help our children focus more on thankfulness for what we already own and enjoy. Then, with Laura, we might find it easier to say:

There had never been such a Christmas.

Rhonda is wife to Michael, a former homeschool teacher, and mother of four young adults. She’s authored five books—Real-Life Homeschooling: The Stories of 21 Families Who Teach Their Children at Home and four on saving money on groceries—plus 120+ articles. Rhonda also coaches students for WriteAtHome.com and teaches piano.